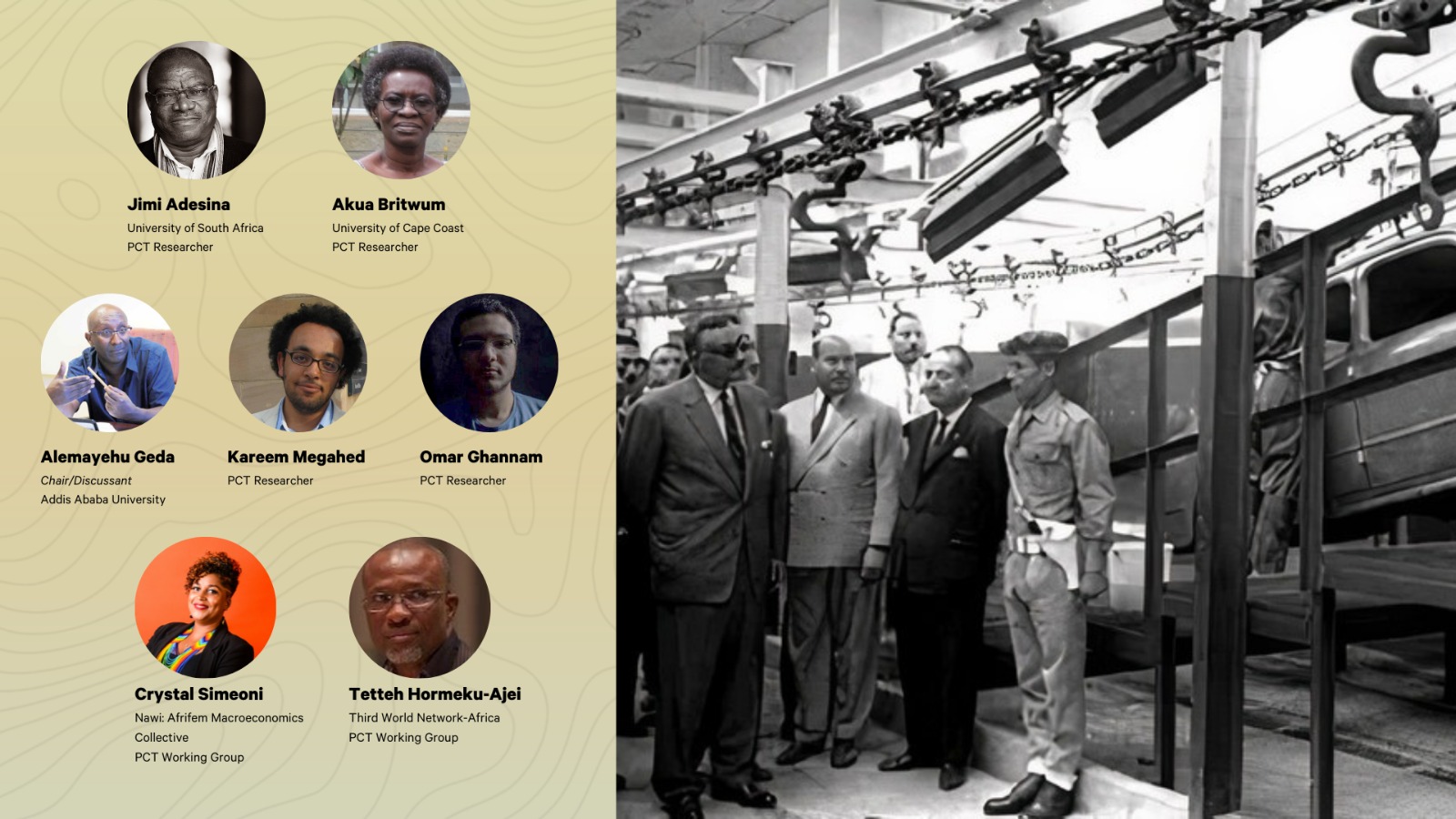 This virtual event from Post-Colonialisms Today (PCT) focused on structural transformation and industrialization, two major focal points for African governments during the early post-independence era. In order to transform their inherited colonial economies, post-independence governments initiated massive development projects and reimagined various sectors of the economy to meet the needs of their citizens. While noting limitations and critiques, presenters unpacked the important lessons these projects offer for our times.

PCT researchers Kareem Megahed and Omar Ghannam emphasized how under Gamel Abdel Nasser, industrialization policy often prioritized the needs of working people by raising wages and establishing a domestic market for manufactured goods. This contrasts with industrialization approaches that focus simply on rapidly building capital and productive forces at the enormous social cost of decent labor rights and jobs, often centered on exporting to global North markets, which also renders economies more sensitive to external shocks. They detailed some of the staggering successes of the Nasserite project, building up new industries and greatly growing real wages. However, they also detailed the various limitations, such as dysfunctions within the inner circles of bureaucracy; the researchers ultimately emphasized the importance of grassroots, active involvement in development planning.

Jimi Adesina (University of South Africa, PCT Researcher) shared insights on the leadership of Kwame Nkrumah and the Convention People’s Party (CPP) in charting a vision for the economic transformation of Ghana, disrupting myths that they over-focused on politics and neglected economics and epistemology. Adesina unpacks their processes and plans to realize industrialization, including complementary investments across technical education, research and development,  foundational infrastructure, centralized development planning, and establishing institutions such as the Industrial Development Corporation. Adesina detailed some of the specific projects undertaken, such as the creation of the Ghana Academy of Science, Akosombo Dam, Tema Harbour, and more. These reveal an overall approach that understood industrialization as an interlocking process that demanded realigning various sectors of the economy.

Akua Britwum (University of Cape Coast, PCT Researcher) further dissected Ghana’s industrialization project, emphasizing both the important coordinating role of the state and the impact of different constituencies. Britwum highlighted the role of women in the fight for economic and political independence—women’s groups were at the forefront of anti-colonial struggles and important members of the CPP. Workers were another constituency in the process of industrialization: they were included in the decision making in their workplace, and often pushed for legislation that would support their organization and ultimately, them as workers. Britwum underscored the critical role that state coordination can and has played, not only in planning and enacting a cohesive industrialization project, but also ensuring an understanding of  collective goals, laying foundations of research, and establishing an underpinning ideology for this structural transformation.

All four panelists engaged in an active discussion with event participants, chaired by Crystal Simeoni (Nawi: Afrifem Macroeconomics Collective; PCT Working Group), focused on how we can apply the teachings from the decolonization era to struggles for industrialization in Africa today. These conversations also provided insights on the shortcomings of industrialization in the early post-independence period, and how the current neoliberal capitalist system impacts Africa’s economies. Structural adjustment policies have deeply entrenched primary commodity export dependence and actively eroded industrialization attempts that could break this pattern, making it all the more important to analyze how past governments worked to combat dependency.

Lessons from the Decolonization Era For Industrialization