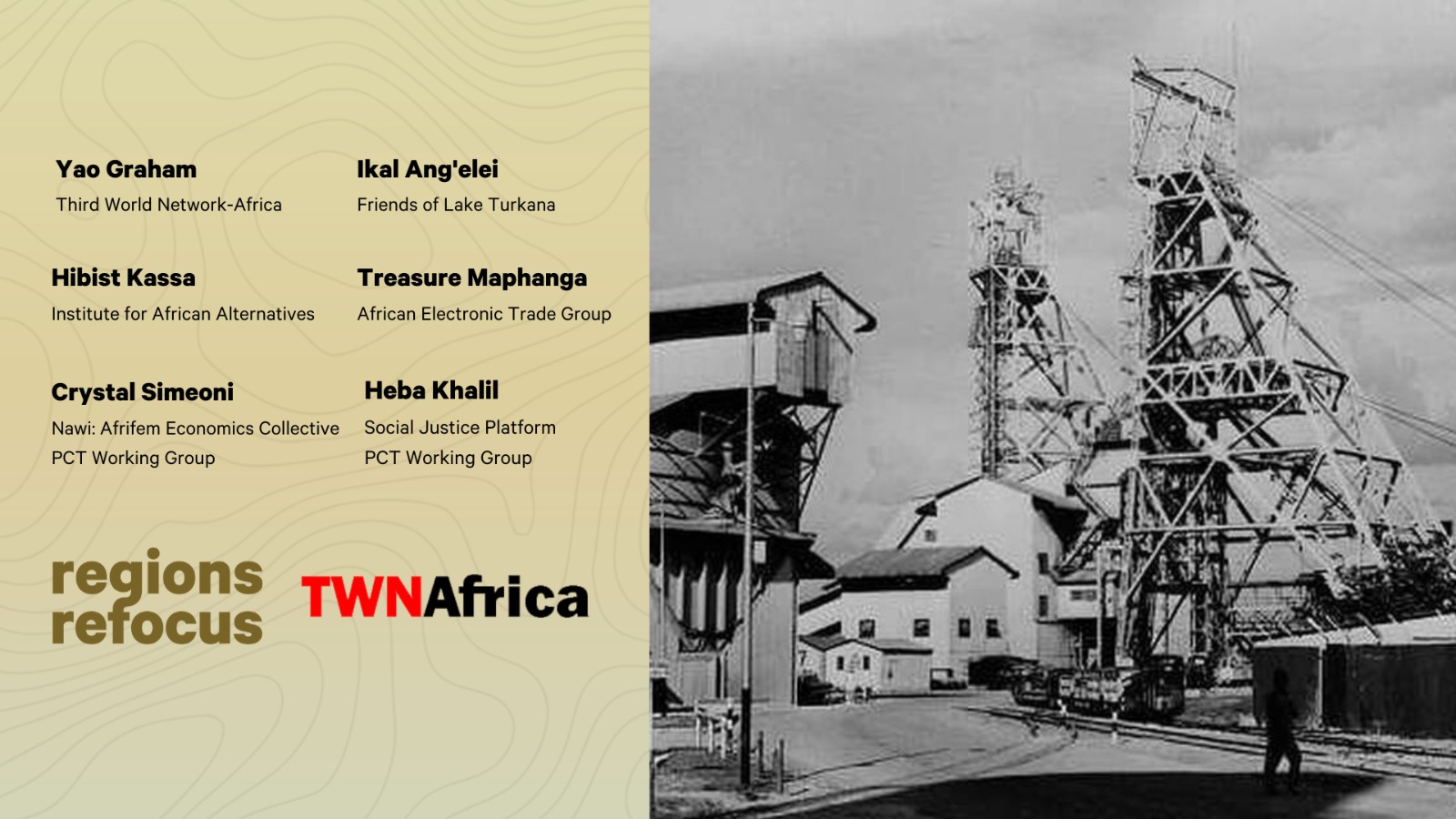 As a follow-up to Lessons from the Decolonization Era Toward Natural Resource Sovereignty, this workshop focused on the dynamics of global trade and production that underpin Africa’s current position within the global system, namely, as an exporter of raw, primary commodities (oil, minerals, etc.) to the rest of the world. Looking at neoliberal efforts to cement this structure of dependency and resource plunder, speakers also unpacked frameworks that move towards alternatives, like the Africa Mining Vision (AMV), and grassroots struggle for ecological justice.

Kicking off the roundtable, Yao Graham (Third World Network-Africa) sketched the last several decades of policy and contestation around natural resource sovereignty. Efforts to assert mineral sovereignty, such as the AMV, were products of political contestation between communities and workers against the prevailing model of extraction and African elites complicit in ensuring the stability of the neoliberal order, and between multinational policy processes like the Lomé Convention and its processes like SYSMIN, as well as the Extractive Industries Transparency Initiative (EITI). The AMV was an important assertion of Africa’s ownership over its natural resources, and has since been met with attempts at containment—for example through the EU’s Economic Partnership Agreements, which outlawed the use of subsidies and other mechanisms that support industrial policy for processing diversification—as well as attempts at fragmentation, such as the G7’s CONNEX and World Economic Forum’s “Responsible Mineral Development Initiative,” which decentered control over the mineral policy reform agenda away from the actual owners of the natural resources.

Sharing her experiences as former Director of Trade and Industry at the African Union Commission working on the AMV, Treasure Maphanga (African Electronic Trade Group) detailed how the inspirational framework goes beyond just technical issues of natural resource sovereignty to be emblematic of an overall spirit of emancipation. She detailed the strength of the policy analysis and recommendations in the framework, and shared lessons learned, such as the importance of making frameworks that are actionable, ensuring deeper discussion and integration at the national level. Detailing concrete organizational challenges and hopes, Maphanga pointed to changes that could strengthen the framework, such as setting a “champion” for the AMV and mineral sovereignty (as other AU policy areas have); establishing a division or unit dedicated to implementing the AMV instead of containing it within the Trade & Industry division; and constructing deeper engagement and leverage within key spaces (such as Mining Indabas).

Concluding the roundtable was Hibist Kassa (Institute for African Alternatives), who detailed an extensive timeline of ecological politics across the continent, from the initial colonial lens, which pushed for regulation towards “efficient and safe natural resource exploitation,” to the post-independence era frameworks such as Ujamaa, which disrupted colonial exploitation but often shared an overall inclination towards modernization without sufficient attention towards sustainability. Kassa traced subsequent waves of mining reforms and liberalization in Africa, from the initial push for a withdrawal of the state to attract foreign investment, to a later limited recognition of the state, but still subordinate to the private-sector “owner and operator” role, all of which has undermined the ability of the state to regulate and protect ecological concerns. Pulling on the work of activists like Nonhle Mbuthuma and Fikile Ntshangase, Kassa points to forms of development that question modernization and still ensure wellbeing, food sovereignty, and autonomy away from the state. She points to the concept of “ecological debt,” which takes into account historical environmental damage caused by the global North and the relations they ingrained, such as primary commodity export dependence.
To deepen discussion beyond the roundtable presentations, participants then broke out into small group discussions along three tracks: trade linkages, regional integration, and ecological justice. This event continued the series on “Lessons from the Decolonization Era,” which also includes events on confronting the COVID-19 crisis, and industrialization policy.