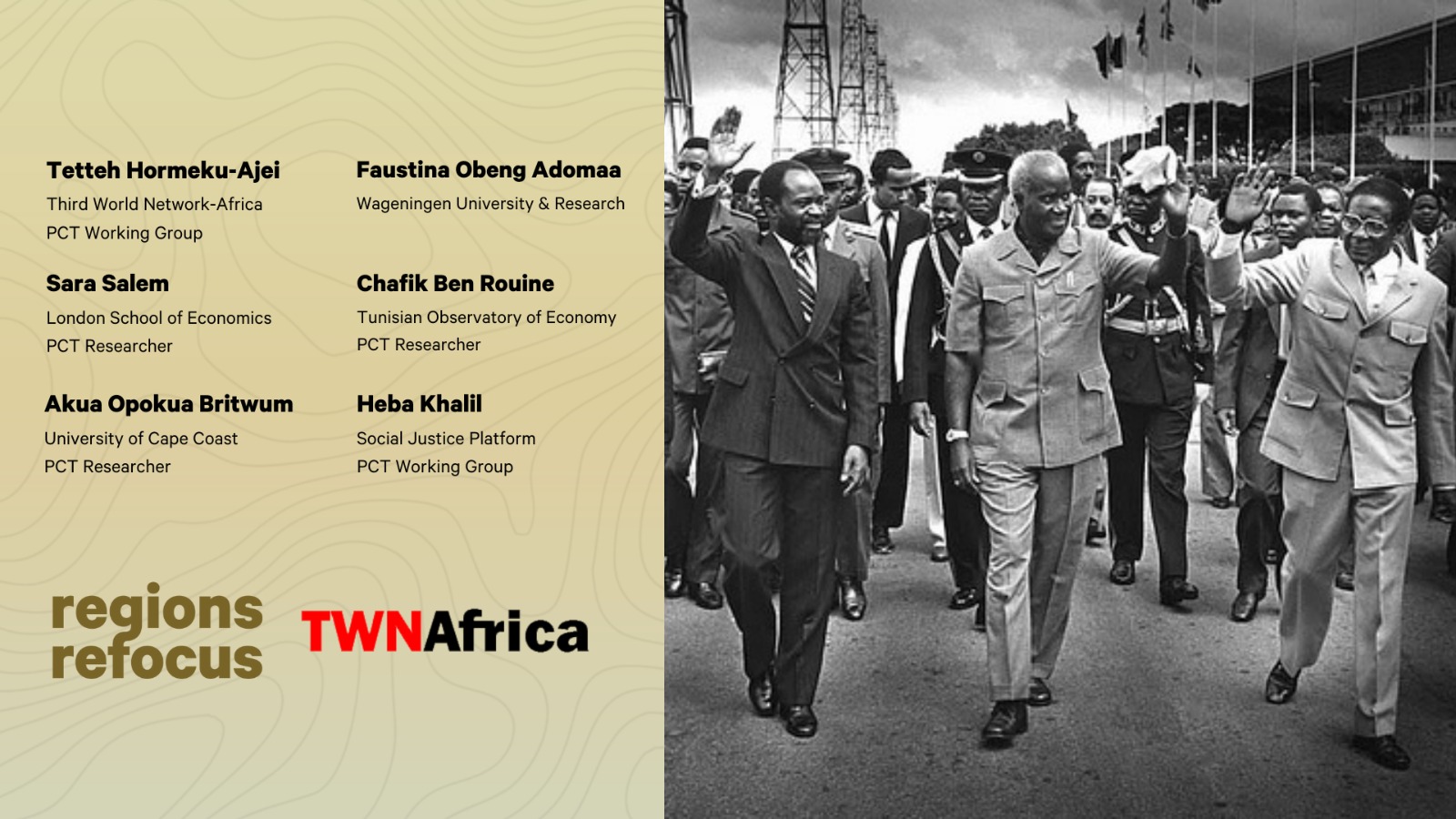 Sovereignty was a key axis of anti-colonial struggles and early post-independence politics, especially over each country’s own resources, which had been plundered by the global North under colonialism. Today, after the early post-independence projects have been derailed by neoliberalism, dynamics similar to colonialism persist, with Africa’s natural resources siphoned off by the global North, and African economies left economically dependent on primary commodity exports. In the post-independence era, this dynamics was seen clearly and concrete efforts were made to confront it: Post-Colonialisms Today (PCT) organized a virtual event to recover lessons from this era and engage in collective discussion; this session was followed up the next day with a workshop dedicated to contemporary struggles and dynamics.

Opening a roundtable discussion, Tetteh Hormeku-Ajei (Third World Network- Africa, PCT Working Group) dissected the structure of  primary commodity export dependence, i.e. an economic reliance on exporting raw materials (oil, minerals, unprocessed agricultural goods) to the global North. Prior to colonization, African economies were organically structured to meet their own internal needs, for example mining iron to make their own agricultural tools. Colonization extroverted and reoriented these economies to meet the needs of the global North, focusing economic relationships and structures towards now exporting these resources (like iron) for the North to process and increase their productive capacity (by developing industry and infrastructure), and accumulate capital.

In the post-independence era, a central focus of policy was to transform these economies. Hormeku-Ajei detailed a number of tools enacted towards this end, such as laws asserting national ownership over all mineral wealth; implementing strong taxation and royalties; nationalizing existing mines; and embedding these efforts into social policy such as promoting good employment. However, these were not without challenges that should be evaluated critically: Zambia, for instance, did nationalize mines but struggled with how the international value chain around minerals was still dominated by the North, meaning foreign copper companies could undermine their efforts. Botswana provides an important example of attempts to counter this problem, with the government stipulating that at least a substantial part of mineral processing take place domestically, and that the procurement of inputs for mining be domestically sourced as well. This fostered internal economic linkages and a more holistic economic transformation away from simply extracting minerals under the control of transnational (or colonial) forces.

Sara Salem (London School of Economics, PCT Researcher) dove deeper into discussions of sovereignty, drawing from her research on feminist and cross-regional efforts in the early post-independence period, using specific examples from Egypt. The essential problems that underpin natural resource sovereignty come from the international political economy, from colonization by the North to neoliberal global institutions. Salem details early post-independence efforts to construct a new international order that supported African natural resource sovereignty and development, pointing to conferences like the 1955 Afro-Asian Conference in Bandung, which emphasized South-South cooperation towards state-led economic development through industrialization and nationalization.

With respect to Egypt, Salem details a strong post-independence focus on independent development, using tools common to the era such as nationalization and a strong public sector. Ordinary people massively benefited from these efforts, but the project was not without its shortcomings: foreign capital again came to dominate, eventually leading Egypt to sign an IMF structural adjustment deal. This undermined sovereignty and dragged Egypt back towards primary commodity export dependence by transforming the country into a “market economy” and de-developing the nation in the process by cutting social services and subsidies, and reducing real wages. Today, this encroachment of Egypt’s sovereignty continues, especially under the threat of privatization linked to capital from Gulf corporations.

Moving beyond passive online webinar formats, the event then broke out into parallel small group discussions along two tracks:

The second track involved a discussion of state capacity and the social dimensions of natural resource sovereignty, led by Akua Opokua Britwum (University of Cape Coast, PCT Researcher) and Faustina Obeng Adomaa (Wageningen University & Research). This engaged discussion unpacked how sovereignty is not simply an issue of enacting specific policies (e.g. nationalizing industries or implementing agricultural extension services), but also one of the structure of policymaking itself, reflected in development planning as a process: including securing the space to make deliberate interventions into the economy (e.g. in agriculture and/or extractives), and mobilizing existing resources as part of the development plan. Britwum also detailed how citizens were able to shape policy processes, dissecting the legitimacy the state has vis a vis its own people.

This event laid the groundwork for a follow up event the next day on contemporary struggles around natural resource sovereignty. This discussion detailed the original, colonial restructuring of African economies, which underpins many contemporary problems, and the rich lessons from early post-independence governments, who used tools like nationalization, revenue capture and assertive finance, state-organized planning, the promotion of domestic linkages, and cross-regional solidarity. This event was part of a series on Lessons from the Decolonization Era, including sessions on confronting the COVID-19 crisis and industrialization policies.