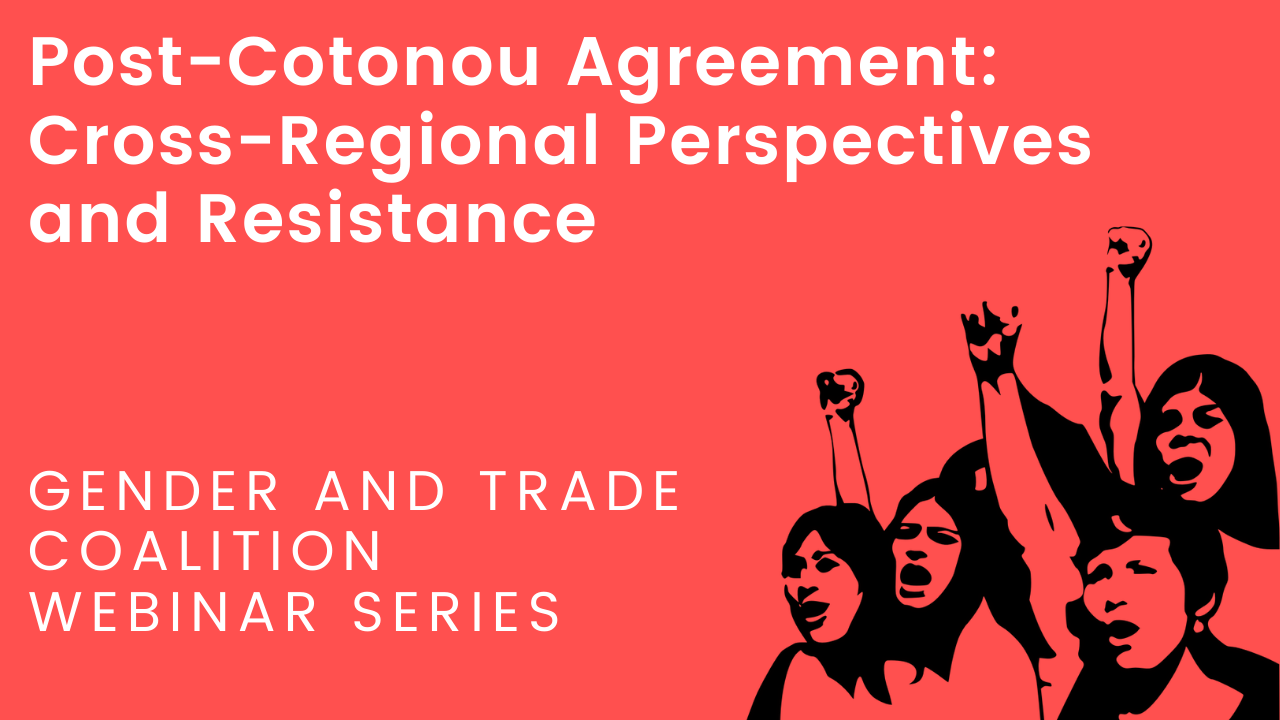 Currently, negotiations are underway to implement the Post-Cotonou Agreement, a deal that will define trade and development relations between the European Union (EU) and the African, Caribbean, and Pacific (ACP) group of states. This pending agreement is preceded by the earlier Lomé Convention and Cotonou Agreement as well as a series of regional Economic Partnership Agreements (EPAs). These deals have increasingly sought to enforce a neoliberal trade and aid dynamic, and the Post-Cotonou negotiations have been no different as they see the EU seeking now to expand into areas such as liberalization of trade in services. As a co-chair of the Gender and Trade Coalition, Regions Refocus organized a cross-regional event building progressive, feminist analysis of the negotiations, as part of the Gender and Trade Coalition’s series “Trade Justice in the Time of COVID-19.” This dialogue highlighted issues of exclusionary negotiations that have been opaque to  civil society, separate protocols for each region of the ACP that prove to be divisive, and a harmful liberalization agenda that aims to exploit ACP resources and economies. Activists also shared lessons from past organizing, especially against the EPAs, and assessed the current state of negotiations.

In negotiations for the Post-Cotonou Agreement, the EU is pursuing extreme measures to gain access to ACP natural resources. Maureen Penjueli of the Pacific Network on Globalisation discusses the dangers of unrestricted access to marine resources in particular, and highlights the power imbalance between the EU and ACP countries, which facilitate the exploitation of ACP natural resources. Penjueli described the asymmetry of these negotiations where the EU stands to benefit the most from the agreement. For example, any binding commitment will disproportionately rest on ACP countries, who will mostly take on the burden of reforming their economies under this agreement; the EU is also attempting to shift the institutional framework of the agreement by creating protocols for each region, essentially working against the solidarity formed within the ACP; finally, the EU will benefit the most from gaining unrestricted access to ACP natural resources, as mentioned in the foundational texts of this agreement. This power imbalance, as described by Penjueli, highlights the neo-colonial legacy that the EU is aiming to continue through these negotiations. Penjeuli stated ongoing concerns with the process of the agreement, making various calls to action in response. First, she suggested that ACP negotiators push back against rushing these negotiations, seeing as it is a binding treaty that has already been restricted due to COVID-19 measures. Moreover, that the foundational document for the Post Cotonou Agreement uphold the same commitments to implementing CEDAW (the Convention on the Elimination of All Forms of Discrimination against Women) as mentioned in its regional protocols. She also called for an explicit commitment on the protection of the rights of sexual minorities, seeing as they face ongoing human rights violations on the grounds of gender identity. Penjueli also mentioned the need to include text that states that data is an economic resource, and commits parties to ensure that data protection policies include recognition of this resource. Finally, she highlighted the importance of mobilizing for laws that preserve and broaden the space for CSOs.

Mereoni Chung, of Development Alternatives with Women for a New Era, shared concerns over a previous negotiating  draft of the Post-Cotonou Agreement. Chung highlighted the gravity of a 20 year binding agreement, especially for ACP countries who aren’t primarily benefiting from these negotiations or the agreement; these countries will be locked into compliance with an agreement that hardly represents their needs. With the onset of the COVID-19 pandemic, negotiations for the Post-Cotonou Agreement shifted to an online platform. As a result,  civil society organizations have struggled to gain access to drafted texts or provide formal input into these negotiations. A main concern highlighted by Chung is the lack of mentioning of CEDAW mentioned in the foundational document, with no mention on how CEDAW will be implemented into this agreement and whether or not there will be protection against gender and sex based discrimination. These limitations further impede full protection for ACP governments and people, as Chung described.

The Stop EPAs movement displayed the power of collective action among activists and civil society groups. David Abdulah, from the political party Movement for Social Justice in Trinidad and Tobago, provided insight and takeaways from this campaign. He shared the four main aspects of this movement that made it successful in its ability to form a collective movement: championing the needs of the people and the cause of wanting to stop the EPAs;  alliances that formed through different levels of interests, whether it be trade unions or academics; the engagement between negotiators, but also others who participated in the policy debates, which led to further educating and strengthening civil society groups; and the act of collective mobilization, which took place through workshops, seminars, meetings, among other forms of rallying. All features of the Stop EPAs campaign were essential, as Abdulah described, and can be used as lessons for the current negotiations of the Post-Cotonou Agreement.

Rosalea Hamilton of the Caribbean Philanthropic Alliance, explained the importance of cultural and creative industries in ACP economies, and how cultural cooperation provisions fell short for Caribbean economies. While in theory, these provisions were intended to build up their economies, it’s outcomes were stunted by inadequate funding to implement the cultural provisions, limitations on stakeholders decision making for cultural industries, and reliance on government strategies to implement these provisions. Hamilton explained the need to build new capacity for the cultural and entertainment sector, using the virtual opportunities that have been highlighted due to COVID-19 restrictions. Hamilton urged us to take a look at the past to learn and better adopt a plan for the future of cultural and creative industries, which were supposed to be propelled through agreements with the EU.

Tetteh Hormeku-Ajei, of Third World Network-Africa, discussed the difficulties of the current Post- Cotonou negotiations, and shared insights on how African states can assert their sovereignty over their natural resources. Hormeku-Ajei flagged several areas of concern in the state of the negotiations: such as the EU wanting undistorted access to oceans and other natural resources from the ACP; the EU trying to adopt different language in the agreement to further their interests; and that the EPAs will be used as a vehicle to also protect the interests of the EU. Hormeku-Ajei echoed calls from civil society for a moratorium on the negotiations of the Post-Cotonou Agreement.

Presentations were followed by a question and answer segment in which the panelists further discussed regional solidarity, resource sovereignty, and EPA negotiations. The Post-Cotonou Agreement negotiations demonstrate the need to move forward and push back collectively against such harmful liberalization policies. This agreement, as outlined by the panelists, will have dire consequences for ACP economies, governments, and the environment without proper intervention. The panel underscored the importance of maintaining cross-regional solidarity in order to defend ACP interests, especially in fragmented and opaque negotiations.

Caribbean Contextualization of the Post-Cotonou Negotiations