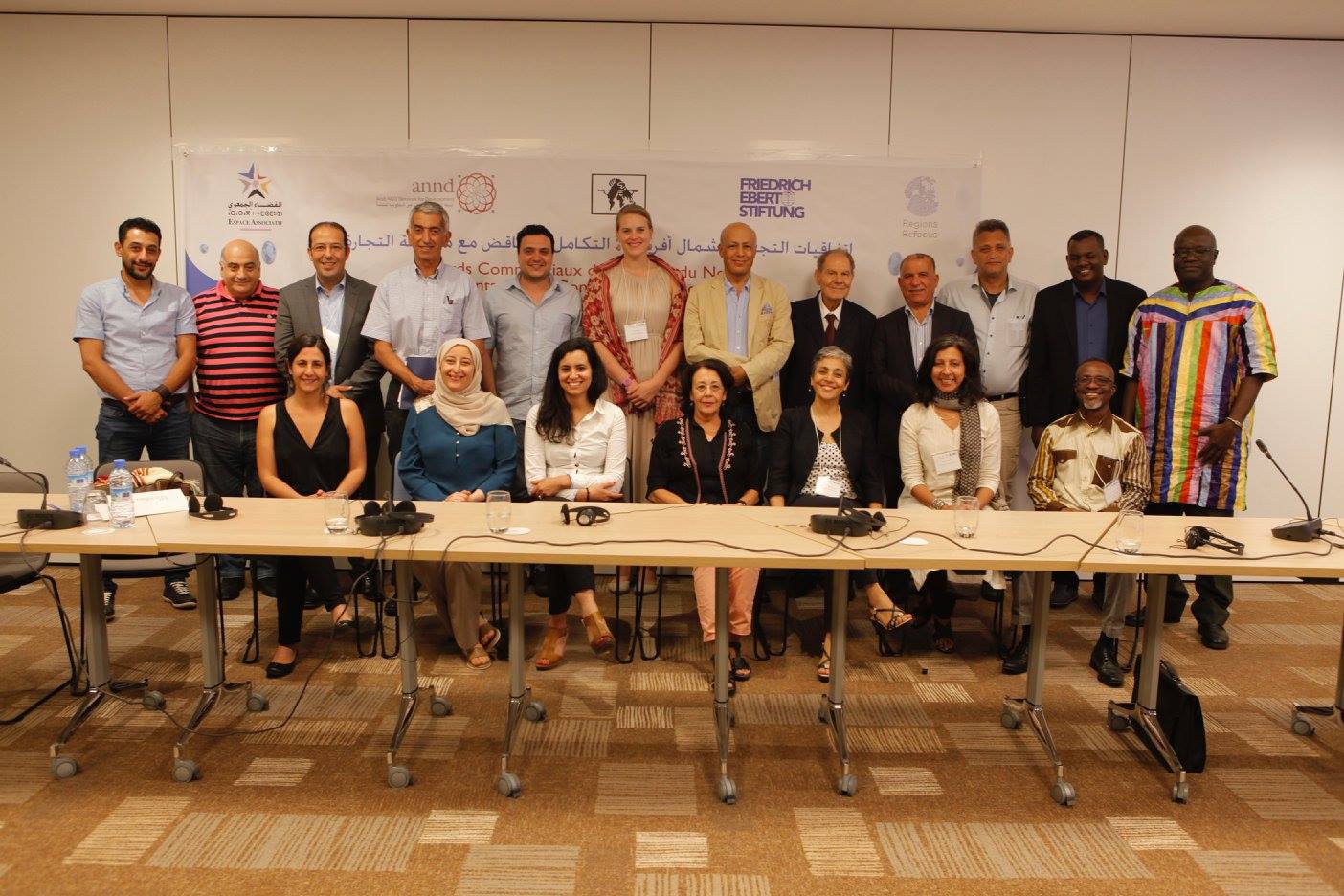 This workshop provided a unique opportunity to air North African perspectives on sub-regional trade relationships in light of the forthcoming Continental Free Trade Area (CFTA), which will deeply impact the Maghreb and the broader North African region. The session offered space to reconcile North Africa’s regional opportunities, challenges, and existing trade agreements with the CFTA. The workshop also served as a space to explore heterodox and feminist approaches to the CFTA, and to strategize towards a mode of regional integration that benefits North African workers, producers, and societies. The workshop was a collaboration between Arab NGO Network for Development, l’Espace Associatif, Third World Network-Africa, and Regions Refocus.

An initial framing for the workshop was offered in a paper and keynote from Mohamed Said Saadi (Arab NGO Network for Development), who argued against continued market-led regional integration relying on exports of raw materials to Europe. Instead, he encouraged a “transformative regionalism” that facilitates structural transformation, solidarity, and cooperation among African countries– as well as including social policies ensuring labor rights, gender justice, essential services, and democratic participation of civil society and social movements. “The reallocation of economic activities from low productivity and added value sectors to higher productivity industrial and modern services sectors,” his paper explains, “can encourage economic growth and equitable development while reinforcing collective industrialization” and regional collaboration. More broadly, the keynote spoke to the need for indigenous models of regional integration rather than a “copy paste of the standard Jacob Viner-type model applied in Europe.” From this starting point, participants from trade unions, government, and civil society presented on and discussed sociopolitical barriers to integration, the trade deficits previous free trade agreements have brought, and more.

Equipped with a collective vision for transformative regionalism, participants analyzed the negotiations for the CFTA, which were ongoing at the time. Different mechanisms for transformation were contrasted, including, for example, special and differentiated treatment (SDT), which would give a time extension on liberalization to least developing countries, with the alternative option of mechanisms of protection according to different categories of vulnerability. This mechanism would recognize the continent’s diversity of production systems and development status. The workshop also strategized on imbuing the CFTA with feminist principles– a difficult task given the scant references to gender in the CFTA. However, existing international and AU agreements were recognized as providing potential baselines, if the CFTA were required to align with them. A feminist lens of the CFTA was seen as inseparable from the broader need for structural transformation because, as participants analyzed, as long as the CFTA and other trade relationships are based on a model of exporting agricultural products, their impact on women will be essentially negative due to their overrepresentation in export sectors and low-paying work.

Going forward, participants developed strategies and built connections centered around injecting progressive analysis into negotiation spaces, capacity-building for government and civil society, and raising public awareness of the CFTA for mobilization. The Arab Maghreb Union (AMU) emerged as a venue for civil society to strengthen in service of transformative regionalism. ANND (Arab NGO Network for Development) and other participants began brainstorming on a North African network to further the work initiated at the meeting. The analysis of this session was carried forward by Third World Network-Africa and Regions Refocus through additional CFTA convenings as well as a chapter by Mohamed Said Saadi in Reimagining Regionalism.