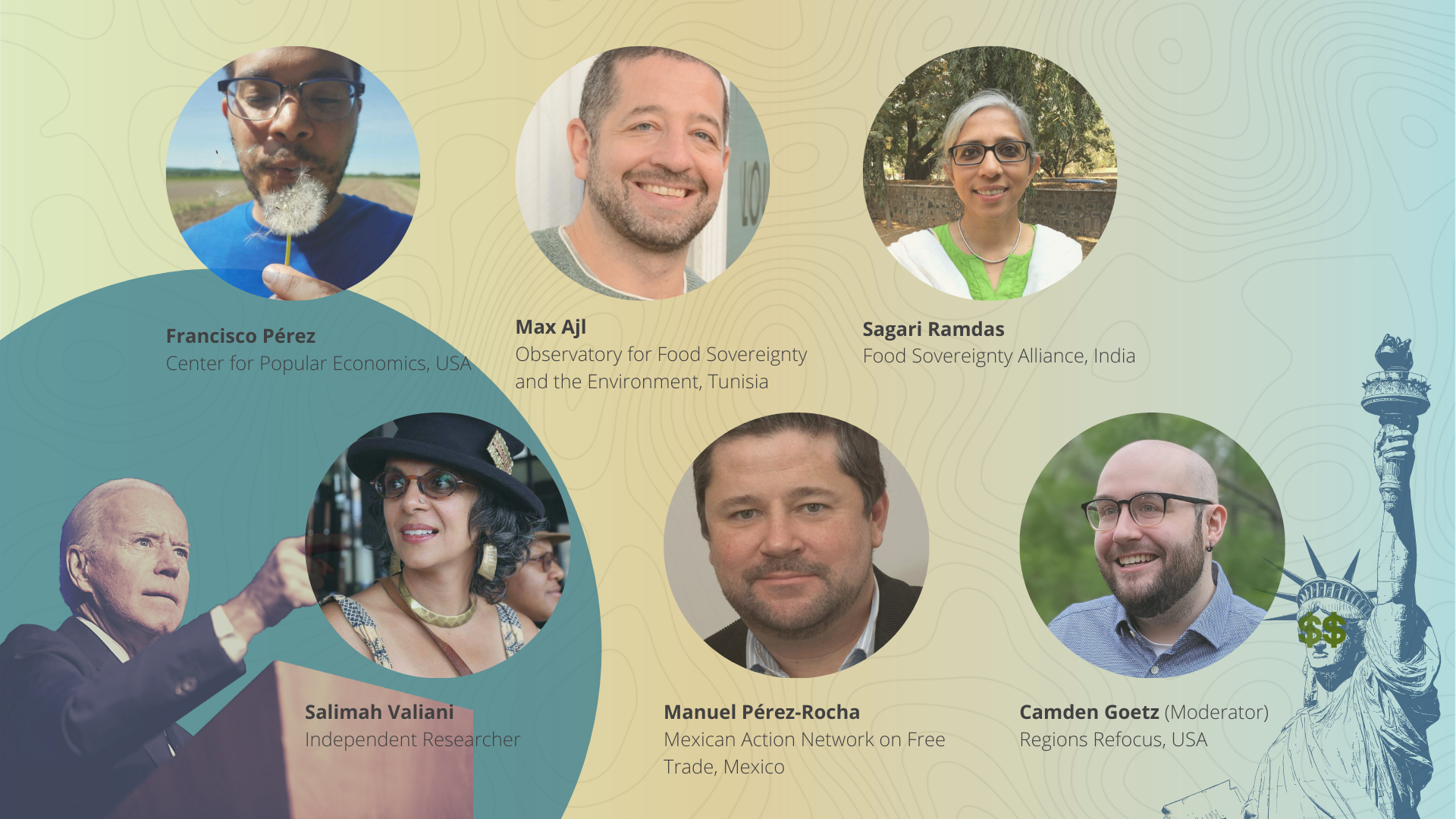 A virtual event with activists from America and the global South analyzed the Biden administration’s role in furthering the U.S. imperialist agenda, organized by Regions Refocus. Speakers dissected concrete policy issues coming from the Biden administration, covering climate change, trade, finance, food systems, healthcare, and more. They also analyzed the ways in which US hegemony is fundamentally built into the global economic order.

The event began with an overview by Camden Goetz, coordinator at Regions Refocus, who shared an orientation on US economic imperialism and resistance anti-imperialist struggle. His framing presentation focused on a dissection of the multifaceted dimensions of economic imperialism, from global intellectual property regimes to the domination of US agribusiness to the imposition of debt traps and conditional loans. The Biden administration showed no signs of reversing these decades-long trends; but, recent years of renewed struggle in the US give hope and make urgent the task of deepening anti-imperialist consciousness. He ended with a concrete analysis of Biden’s 2021 trade agenda, which furthers disastrous “free trade” approaches.

Francisco Pérez, of the Center for Popular Economics, broke down the monetary aspect of U.S. imperialism, focusing on Special Drawing Rights (SDRs).  He explained how the U.S. is able to exert extraordinary influence by virtue of the US dollar serving as a global reserve currency which the US government controls, effectively positioning the Federal Reserve as a kind of global central bank. Pérez also broke down the imperialist structure behind Special Drawing Rights (SDRs), a reserve asset controlled by the International Monetary Fund (where the US retains veto power) that is distributed unequally between regions. He provided various examples of what demands U.S. organizers can push for to support the Global South, for example approval of trillions of dollars in new SDRs, debt cancellation for global South nations, the establishment of emergency swap lines with poor countries by the Federal Reserve, and an international sovereign bankruptcy procedure.

Sharing critical analysis on the Green New Deal and other climate policies, Max Ajl (Observatory for Food Sovereignty and the Environment) focused on how the U.S. is furthering “green imperialism” through such policies. The U.S. has consistently abused world resources through the use of militarized accumulation, as Ajl explains. Through the use of climate policies, the U.S. is perpetuating this violence on nations of the global South, and ignoring its own role in furthering climate debt and uneven accumulation of world resources.

Sagari Ramdas from Food Sovereignty Alliance- India discussed food sovereignty struggles in the global South, showing connections between the global neoliberal system and agribusiness. She shared a brief history of the formation of farm laws in India, which has resulted in mass mobilization of Indian farmers against these harmful policies. As Ramdas explained, these policies result in a control of food systems which is inherently violent to marginalized people in the global South.

Manuel Pérez-Rocha from the Institute for Policy Studies and the Mexican Action Network for Free Trade, shared insight on extractivism and the U.S.- Mexico- Canada Agreement (USMCA). Free trade agreements have consistently pushed the neoliberal agenda, to ensure that nations in the Global South are economically dependent. Rocha explained how investor-state dispute settlement mechanisms ultimately end up being tools of neocolonialism, used by extractivist industries to sue developing nations. He used these examples to explain how the USMCA continues to perpetuate the neoliberal violence that harms the people of these nations, their economies, and the environment, and detailed alternatives from his work

Salimah Valiani, independent researcher in Johannesburg, analyzed the COVID-19 pandemic through the lens of global imperialism and political economy. Drawing on a framing of fundamental anti-imperialist analysis like Samir Amin’s, Valiani explained that the privatization of healthcare is a result of U.S. hegemony, which monopolizes healthcare technology. During the pandemic, certain medical technology such as PCR tests, N-95 masks, ventilators, and vaccines, have been heavily commodified and inaccessible to many. This happens not just through domination of intellectual property law, but also through controlling monopolies of production, and active underdevelopment of global South productive capacity. The essential task to confront the pandemic and save lives, Valiani explained, is to decommodify healthcare:

While Biden promised an immediate shift from the Trump regime, little concrete change has manifested and many harmful policies continue. Panelists pointed to important ways in which US imperialism is not simply a choice of policies that changes by administration, but part of the fundamental structure of the global economy, requiring fundamental transformation of monetary systems, food supply chains, climate plans, and much more.

Collection of Resources from Panelists Extractivism and the US-Mexico-Canada Agreement US Hegemony and Decommodifying Healthcare Panel Q&amp;A: Biden and Economic Imperialism